An SP24 Adventure – The big day

And the big day – Conference time!

The build-up on the day of the big ‘go live’ gradually got more stressful as it progressed. We were behind on tasks such as sending out the necessary reminders and testing! Our biggest mishap was that we hadn’t recorded our opening intro to kick of the conference. We had been planning if for a few days, but no one had any time to write out what we wanted to say, or how we were going to do it. Jon Manderville eventually wrote the script at 9pm (2 hours before live) which we were going to record on camera. After the first couple of tests we were interrupted because of a near fire in the war room. (During the day we had inadvertently wrapped a curtain around a light bulb which after it had been turned on at night was beginning to melt the curtain and send out smoke!). Once that craziness was out of the way, Paul Gallagher told us we had one ‘take’ go to get it right – and he wasn’t lying. Finally, at 10:58pm (2 minutes before live), Paul had managed to get the video uploaded and mastered into YouTube. As we had no time to test it, the first time we saw it was when the world did! (That video is now locked away never to be seen again!) We also used a remote control player I had developed, which allowed us to push out the intro to all attendees which worked really well! Once that was complete, we then pushed out Bill Baers live session to start his keynote. After that we could relax for about 5 minutes. From then on we had a minimum of 4 concurrent sessions running in each of the following 24 hours (with 2 live sessions in each hour). 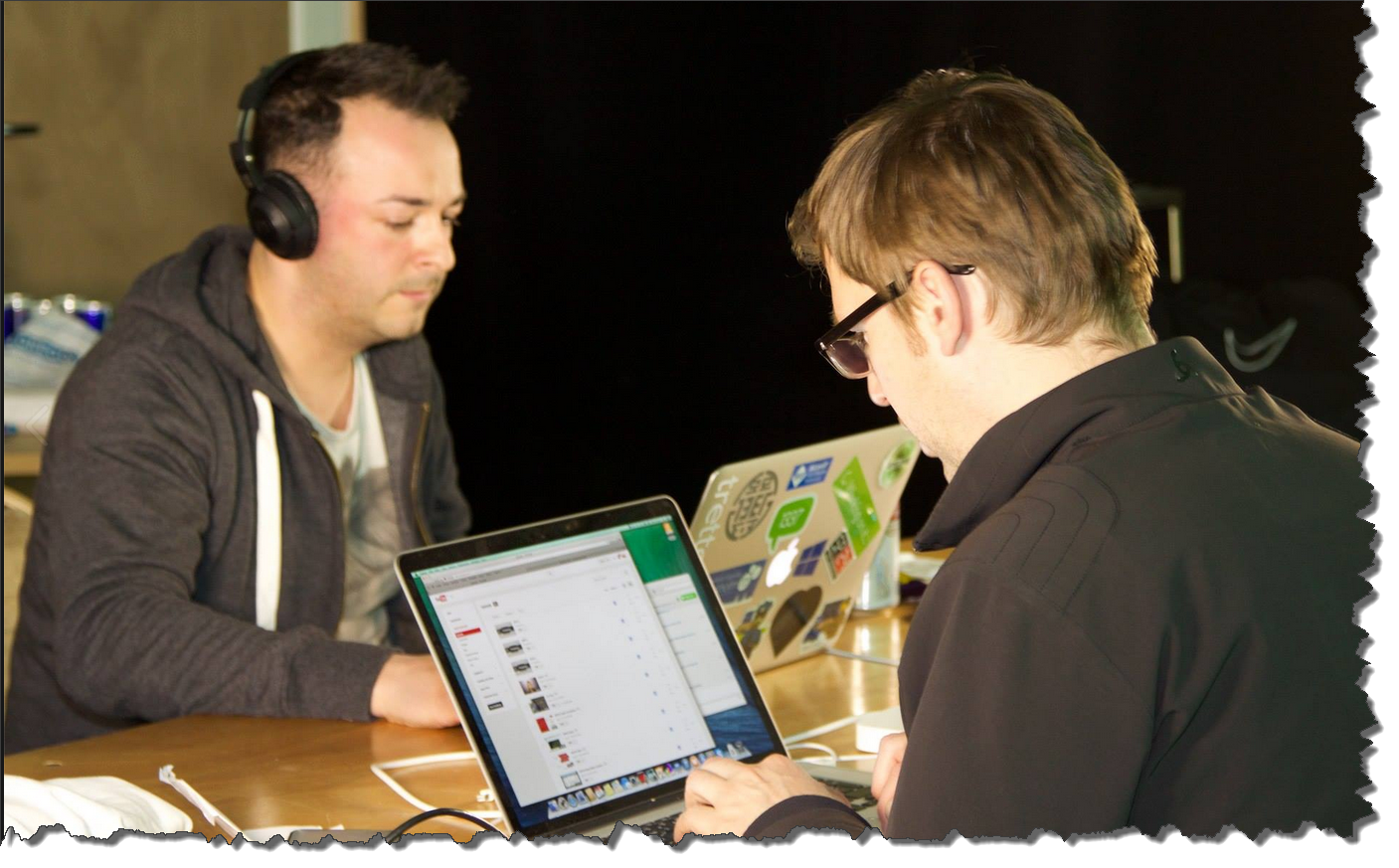 It was a pretty stressful experience and was very interesting to see how all the guys reacted. Even Paul – Mr chilled out Gallagher – was showing signs of strain.

Paul and Matthias – our heroes of the Hangouts!

By the time the Conference started, only 2 of the team had learned Google Hangouts well enough to manage it. We always knew this was not enough but again time got to us. The plan was to get these two guys to train other team members, but we hadn’t also realised that 1) They’d have no time, and 2) the other team members were either dealing with technical support and re-scheduling last minute changes to the agenda. We also had a team monitoring the chat rooms from their bases in India (Jasjit Chopra), Austria (Stefan Bauer) and Canada (Vlad Catrinescu). Against all the odds, and quite unbelievably, Paul and Matthias produced nearly EVERY single session for the entire 24 hours – Pretty incredible! How they stayed sharp enough I’ll never know. They did get some relief when Andy Talbot turned up to the room (with some very welcome refreshments!). Andy was anchoring for 6 hours so was also able to take care of the production for one live track!

Religiously, before every single session Jon played time keeper. With 10 minutes to go, he’d stand up and shout “10 minutes left boys, 10 minutes“. This would cause Paul and Matthias to stir into action so they could inform the Anchors that they needed to nudge the current Speaker to finish up and also start to warm up the new ones. Then – when the new session was ready for live, Jon would count down from 10 seconds to 1 and Paul and Matthias would push the session live. I know everyone appreciated having some structure each hour, but to this day we were never quite sure when to start the countdown. If you don’t know, Google Hangouts Live, will automatically have a random buffered delay and this will also vary by a couple of seconds around the world. Adding this into the mix (along with different browsers clocks) made it a challenge at the start and also caused us a lot of laughter by the end.

Speakers live from the ‘War Room’

A couple of the Speakers actually presented their sessions live from the War Room. Hugh Wood (who had already been with us from the day before) managed (after being awake the entire night), to deliver an amazing session on SharePoint and Javascript.

We also had Bill Ayers join us towards the end of the day who delivered a session and then hung around with us until the bitter end!

Things to improve next time!

We learnt a couple of lessons to take into the next conference (in fact we already improved and fixed them in SP24 Rewound). The first thing that we realised wasn’t working well was showing the Trailers before every single session. I regretted that as soon as the feedback started coming in. We even had a fix ready on the night, but Jon – being the PM he is – wouldn’t let us implement it! (Pah – the cheek!). However, given the tiredness and risk factors this was probably a very wise decision.

There were also a couple of sessions that had no sound. This was a genuine mistake, we had checked all of the videos before uploading to Youtube and spot checked a few afterwards. As it turns out they all need to be checked as YouTube will encode them on upload which may or may not work :(. Where time permitted, we re-uploaded and rescheduled during the night.

We also had a couple of snags with the Hangouts we had pre-prepared before hand. If a speaker accessed the Hangout before Matthias or Paul did, it caused us problems. This meant we had to update some of the session information, which of course had knock-on caching issues.

Against all of the odds, we managed to pull it off! We ran the biggest on-line SharePoint Conference that had taken place and entertained delegates from a staggering 193 countries! On the whole the feedback we received was awesome with only a smattering of grumbles. Here’s a sample:

“All of the organizers can pour something nice into their glass, sit back and say that they have done a large thing in their life. This event is a cherry on top of a cake that show what a great community is supporting and thriving Sharepoint. Holding an online event seems to me much more difficult and risky than physical conference and I’m amazed how smooth all the sessions where. I salute the organizers and everyone who attended.”

“The goal of a conference is to permit participants to find new and interesting information and to interact with presenters. Your great conference achieve this. However, I am sure there is a big number of attendees which were not able to attend how much they wanted to attend. And this is because of 24 hours format. Once the sessions will be online I will attend all of them, but interaction with presenters will be lost. By the way, the chat should be available as it contains important real life information. Many thanks again for your great effort.”

“Great speakers, great online format, and very well executed. I was also very glad to have the rewound opportunity a month later. Having the times shifted allowed me to attend some other sessions that were too late in the day for me the first time around. Overall, VERY happy with SP24 and SP24 Rewound. Hope you do it again in 2015.”

“How come a virtual conference could create such a buzz here in our own office and then make us rush home to catch the rest of the sessions from our sofa. I know…because it rocked! What a fantastic idea. Quality content, great atmosphere, outstanding organisation. I learned tonnes of new SharePoint knowledge and I felt at one with the worldwide SharePoint community. We are still addicted to the site, writing up our notes, ideas, thoughts about what we learned on our own internal SharePoint blog to help with our strategy, governance and solution support. Can’t wait for SP24 Rewound so I can catch up on the sessions I missed. It’s also a chance to get another SP24 fix! I can’t believe this was all free and the after service you are providing by leaving the site up and having the rewound sessions is great. In fact, I wouldn’t even mind paying a fee to attend this conference in the future if you weren’t able to do it again for free – it was that good!”

“I am not a fan of watching after hours.”

“Keep national access limitations in mind and inform your attendees prior to the event.”

“The second time it worked better. The first time I could not join sessions due to the trailers.”

“Have Hugh Wood wear something silky”

The importance of versioning in policies

The importance of assigning owners to your policies